Overnight buses can lead to real confusion – waking up in a different location, wondering what day it is and sometimes whether you have slept through your stop altogether!  On this occasion we were being asked to get off the bus at 6am and told we had arrived in Arequipa which had us slightly confused as we had anticipated arriving quite a few hours later.  We stumbled off the bus, a little lost only to arrive at our hostel and be told that I’d actually booked for the night prior and therefore they had cancelled our booking!

We worked it out eventually and went to get some much-needed coffee in downtown Arequipa.  We walked to the main square, Plaza de Armas which is surrounded by grand, large buildings made of sillar, a white volcanic stone.  Arequipa is Peru’s second most important city after Lima and also the second most popular tourist destination after Cuzco due to its proximity to many Southern Peru attractions including Colca Canyon, which we were to explore the next day. 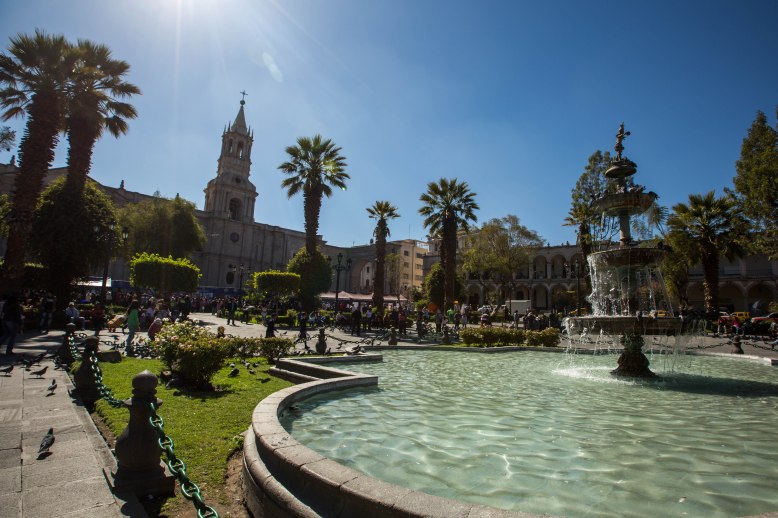 We were awake early for the 160km journey to Colca Canyon, winding around the Colca Valley as we drove to our first stop.  The Colca Canyon is one of Peru’s most-visited tourist destinations and is reportedly twice as deep as the Grand Canyon at 4,160m at its deepest point.  The canyon is also home to the Andean Condor, the 4th largest bird in the world with a wing span of up to 3.4 metres!  Our first stop was at Cruz del Condor where you can watch at close range as the condors fly past the canyon walls and high in the sky above. 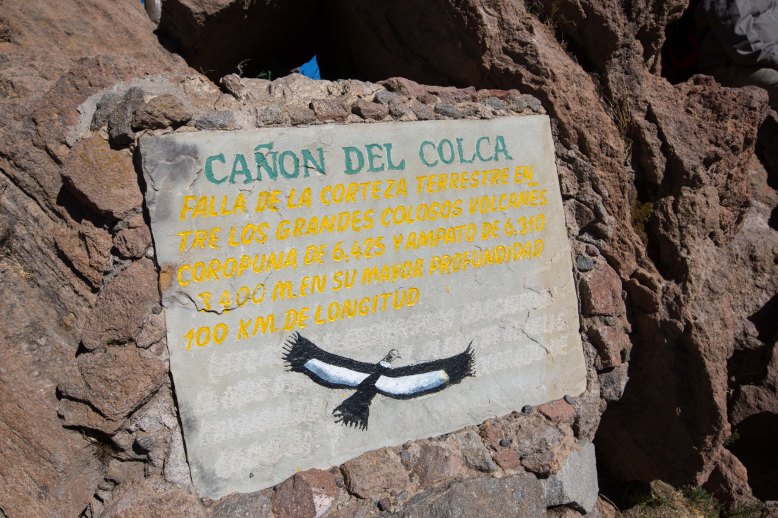 CONDORS. ARE. HUGE.  Like, really, really big and that is when viewing them from a distance!  They are certainly not the prettiest of birds but they are most definitely impressive.  We watched as they soared around, simultaneously accumulating way too many blurry condor photos but even our good photos do not really do their size justice!  Just for the fun of it, here are some more condor photos: 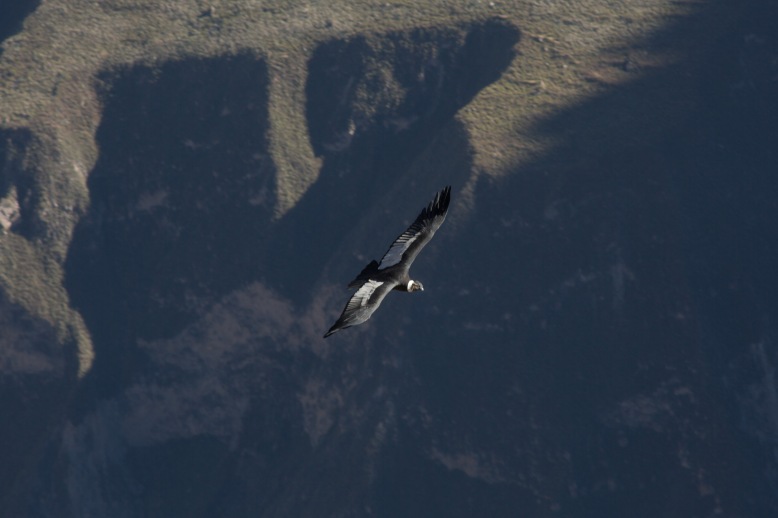 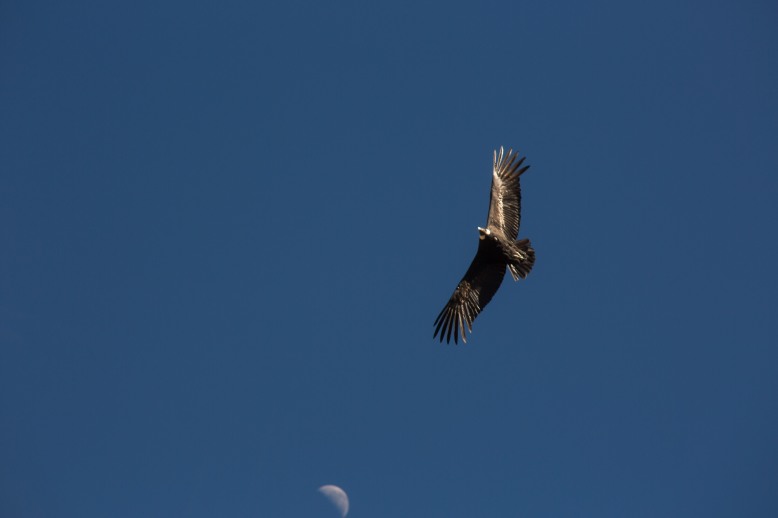 We continued on, arriving at the point where we were to begin our hike further down into the canyon.  The view from the top was fantastic although I must admit it was completely different to what I was expecting.  As far as canyons go, I am really only familiar with the Grand Canyon in the United States and Kings Canyon in Australia which are completely different to Colca Canyon which to me more so seemed like a large valley.  Yes, now would be an appropriate time to look up what constitutes a canyon but I’ll leave that for you who are playing at home. 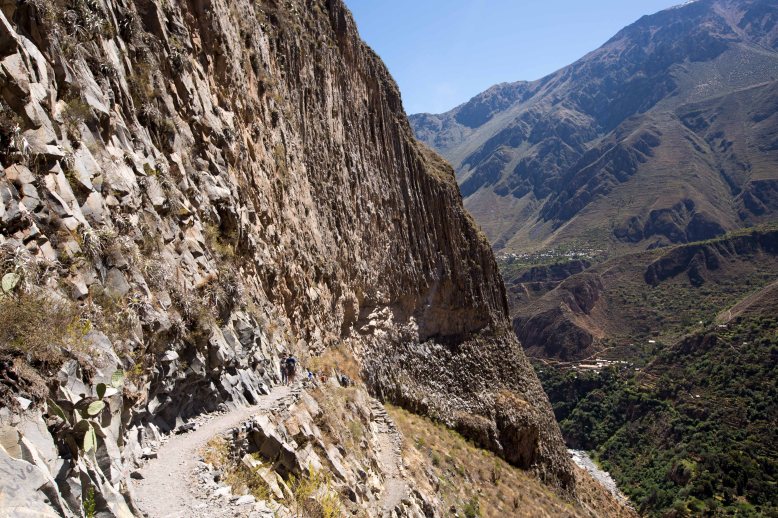 We walked down slowly and I was very quickly missing the hiking sticks I’d learned to use and love.  At times our trail down into the canyon was quite steep and I could feel my knees beginning to hate me as we zig-zagged our way down.  Eventually we had made our way to a bridge at the bottom where we stopped for a quick break before a short walk up-hill on the other side to our accommodation for the evening.  Looking back across the canyon at the path we had walked down it looked so small in comparison to the canyon as a whole.  See if you can spot it in the second picture below! 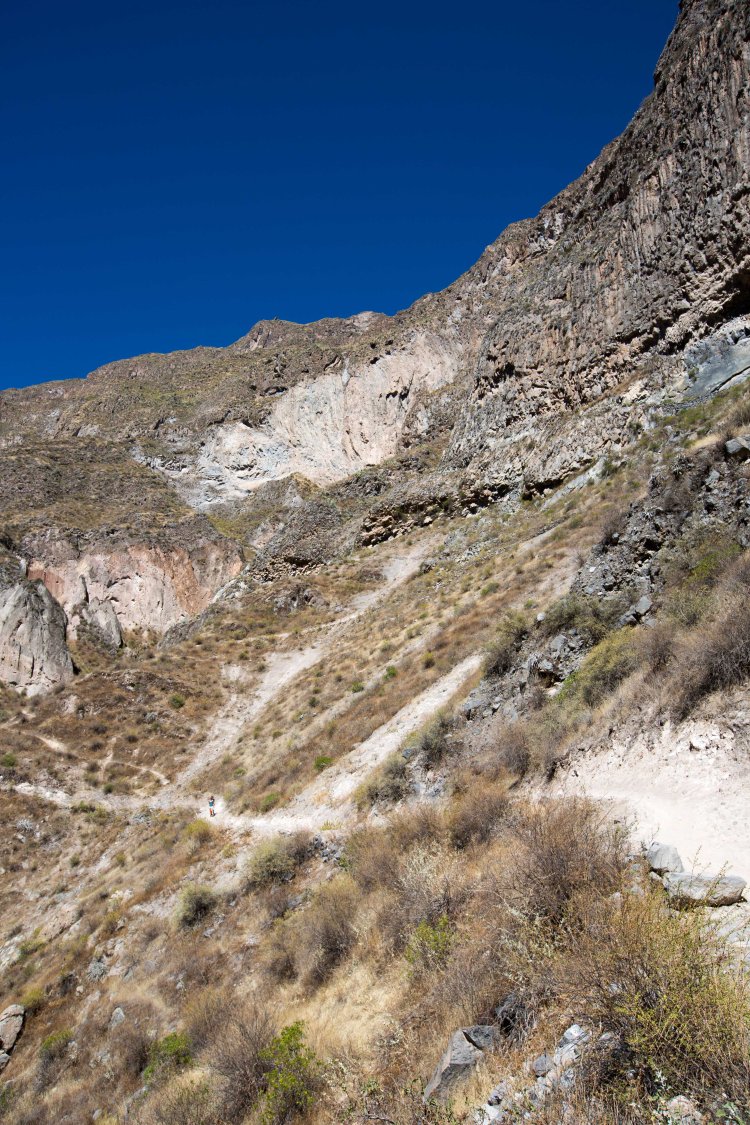 Our second day had us walking along one side of the canyon but climbing up and over before heading down once more.  On the way our guide explained about the different types of plants in the canyon including edible fruits of different cacti and other trees.  We also learned about different animal noises thanks to the group of English boys doing their best impressions along the way which while incredibly irritating, momentarily took the focus off the amount of hiking we were undertaking.

We walked through a small village, which is now almost uninhabited outside of an annual festival that is held in the town.  One “lucky” family is given the honour of having to pay for the festival – food, drinks, entertainers etc I feel like the cost would outweigh the honour but nevertheless it is about the most populated the town ever gets with Peruvians from near and far arriving in time to enjoy the hospitality.

Continuing through the town and passing over one side we once again looked down into the canyon and with time we could see the “oasis”, an area full of palm trees and pools of blue water, also our campsite for the evening.  We zig-zagged down and around, over bridges and back up hills before making our final descent into the oasis.  This is what it is all about – pools surrounded by palm trees overlooking rivers and mountainsides.  We enjoyed the water and the chance to relax before some cards and dinner and yes, in the picture below, that is the track out to follow the next day!!!! 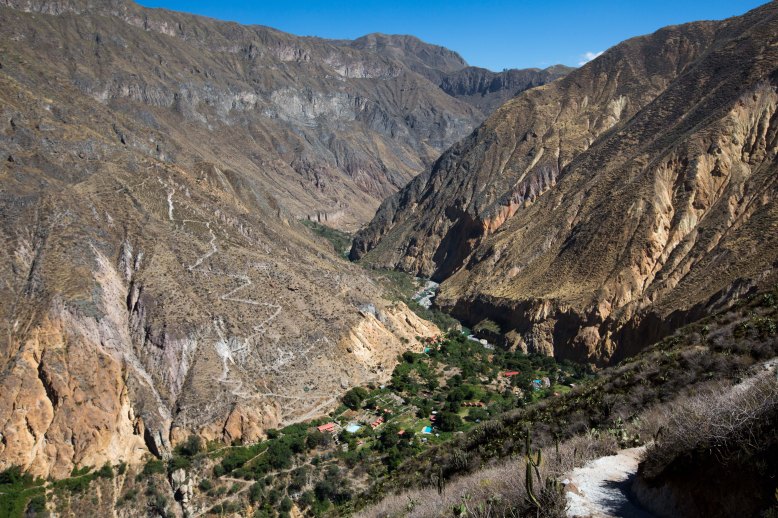 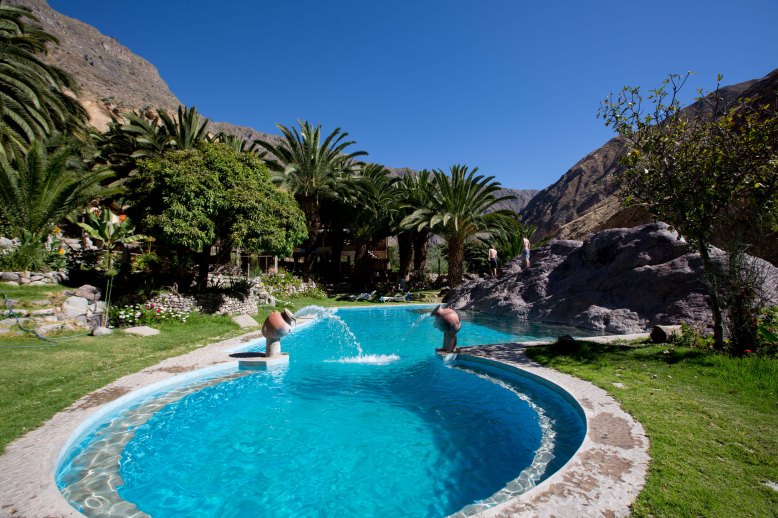 The following day arrived and if I had to describe it in one word, that word would be: HELL.  So physics comes in to play here – what comes up must go down… or vice versa.  We were up at the crack of dawn to hike out of the canyon and yes, that was necessary because the moment that sun hits the wall of the canyon you are going to wish you were already at the top!  Hands down, the one disadvantage of hiking into one of the deepest canyons in the world is the fact that you also have to hike out and I can honestly say I did not enjoy this one bit.  Nevertheless, I did make it… even if it was after every single group had made it and the rest of my hiking group was waiting hungry and patiently at the top!  Here I must give credit to Will because he put up with my s#!t the whole way up and still managed to have time to encourage me. 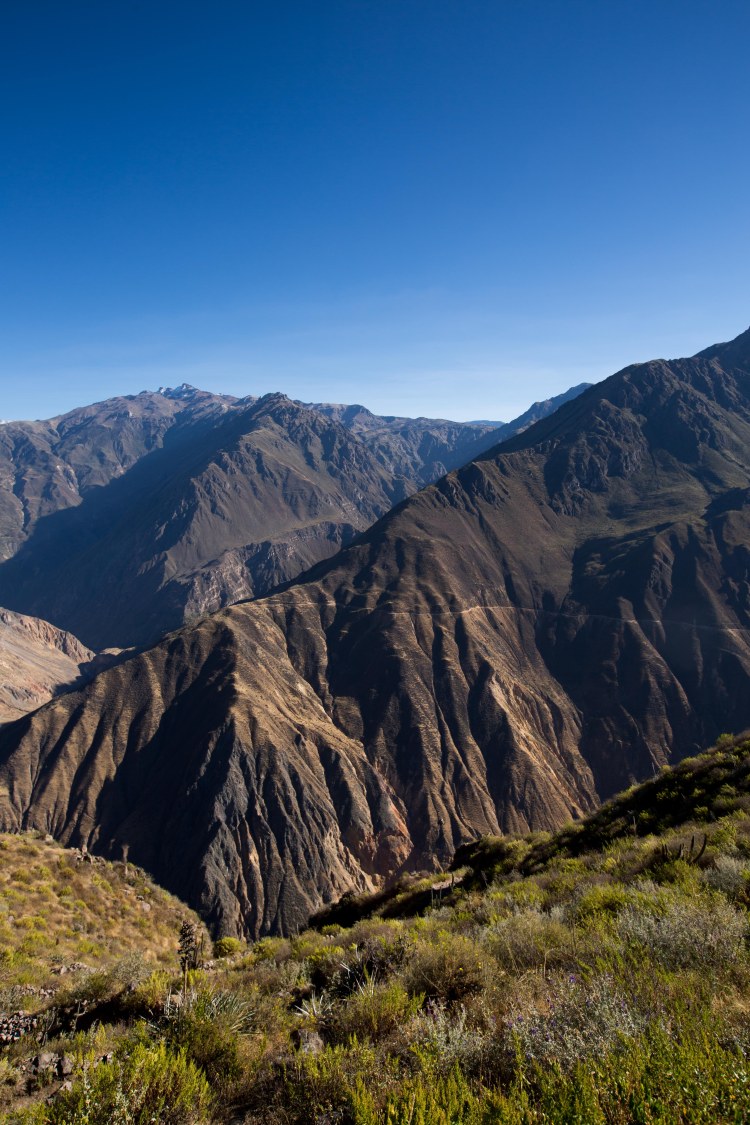 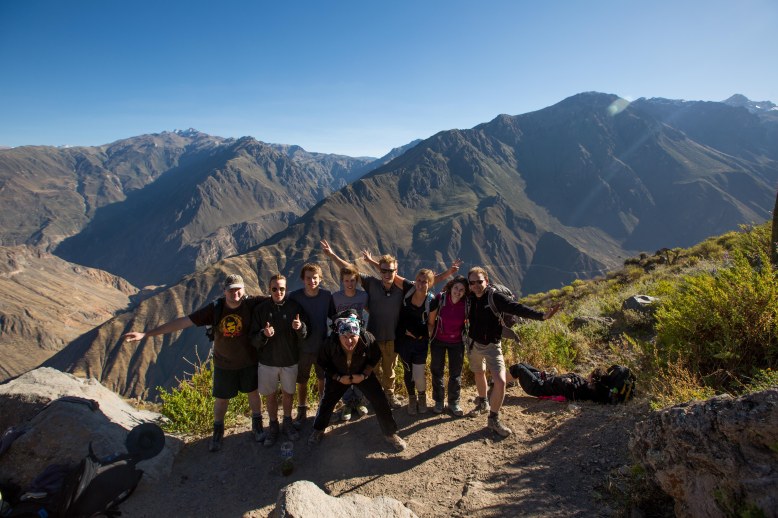 With us (as in me) FINALLY at the top we continued walking on to the nearest town where we had breakfast awaiting us.  Feeling invigorated once more we continued on, driving along the Colca Valley where the local people maintain the ancestral traditions of the land and continue to cultivate the pre-Inca stepped terraces.  Looking down into the valley is quite impressive, with the different terrace levels and sizes creating patterns in the valley wall. 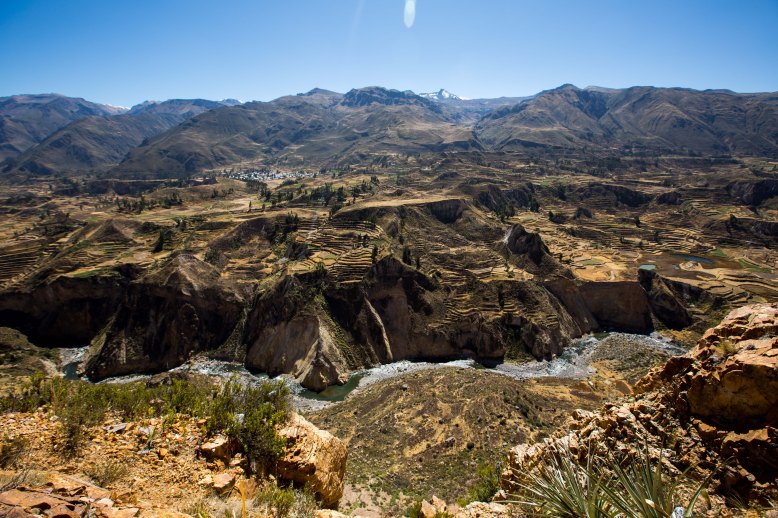 We took our last views in of the Canyon before we continued on to a nearby town.  In this town I held probably one of my favourite birds of all time and by that I mean “I have no idea what your actual bird type name is but you look super cool and that’s all that matters” sort of bird.  The guy who owned this bird was all about having it land on my head wearing his hat and then my arm, digging its super sharp talons into my bicep but hey that’s cool I have a crazy bird on my arm so whatever.  Also noteworthy was the small church and incredibly cute donkeys nearby. 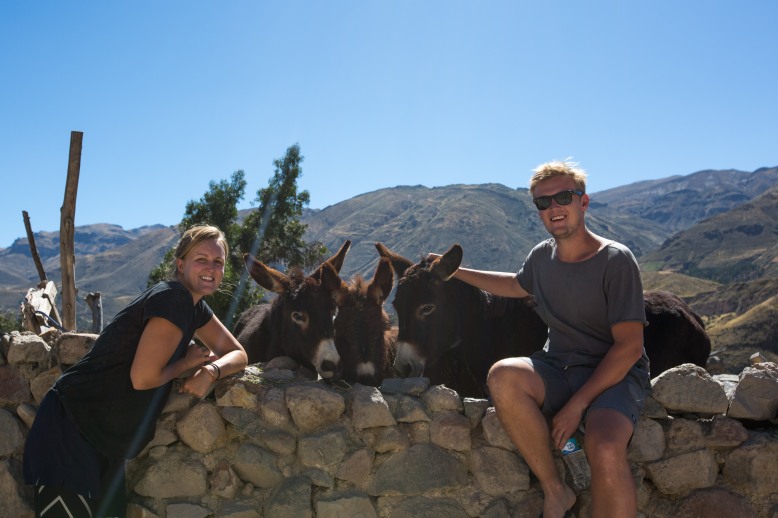 Finishing off our adventure we stopped at some hot springs which really were the perfect antidote to hiking out of ridiculously steep canyon all morning.  On the bus back to Arequipa we stopped at a viewpoint where you could see volcanoes out of every direction which was pretty impressive, along with fields full of llamas doing their thing out in the wilderness.  Another 3 day trek down exploring more beautiful landscapes and staring down more crazy switchbacks.  It was another fantastic adventure although maybe not the best option after just finishing a 4 day trek to Machu Picchu.  Nethetherless our bodies once again taught us we were capable of a lot more than initially anticipated and we returned to Arequipa, ready for the next adventure. 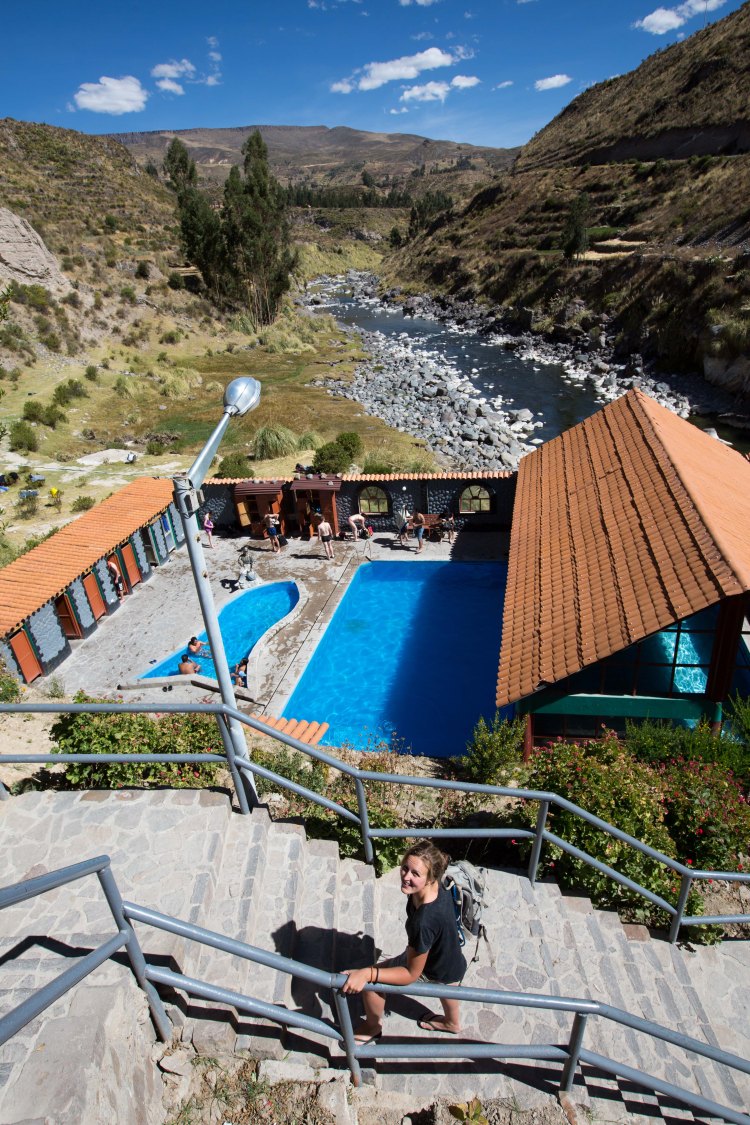