I ‘m not sure that I’ve ever been on a quicker plane ride than the flight from Sucre to La Paz, it seemed we were landing only moments after we had taken off!  A quick mention to the dinosaur phone booths they had at Sucre’s Airport – hilarious!  Together with Niels and Sander we caught a taxi towards the centre of La Paz and as you approach, you can’t help but let out a little “wow”.  Unfortunately I don’t really have a photo that shows the city as a whole (in fact, I don’t have many photos from La Paz at all!) but it is just a really unique city – highest capital city in the world and visually different to any other.  It does however seem to lack a lot of the charm that other capital cities possess and after spending 10 days in the picture perfect Sucre, it was quite the contrast. 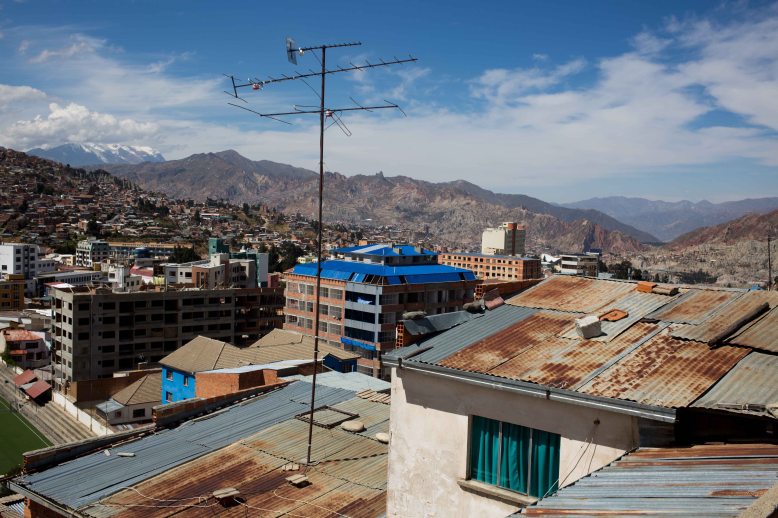 Unfortunately within our first 24 hours I was battling my second case of food poisoning with Will to follow 24 hours later.  Instead of seeing the sights of La Paz, we saw a lot of the hostel bathroom!  When we finally were up to the challenge we walked around the city, huffing and puffing with every hill which I like to blame on the altitude but is probably more so general unfitness.  This, along with the fact that you are breathing in vehicle fumes rather than air 90% of the time!  In some respects it is hard to paint a pretty picture of La Paz – thousands of red brick buildings cover literally every inch of the city, many looking like the builders reached a point in construction and thought “you know what, that will do”.  That being said, the city centre contains some beautiful old colonial buildings, while downtown skyscrapers tower high in the sky with perfectly manicured gardens surrounding. 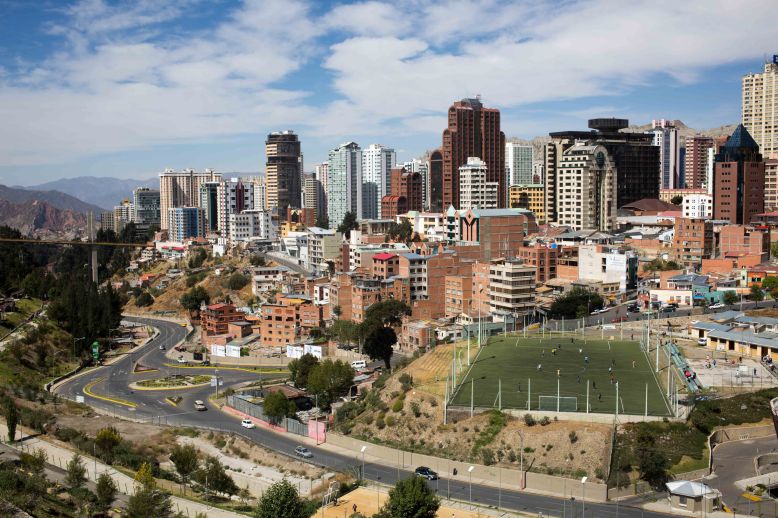 When we were finally feeling up to it we decided it was time to get adventurous and signed up to bike ride down the infamous Death Road.  Our imaginations were in overdrive after meeting various backpackers along our travels with sprained ankles, broken arms and bruised egos!  Could it be that dangerous?  There was only one way to find out.  Feeling slightly nervous we piled in to a minibus and drove to the beginning of Death Road.  With protective clothing, knee pads, elbow pads, gloves and helmets we were as prepared as we would ever be as we hopped on to our bikes and began travelling downhill. 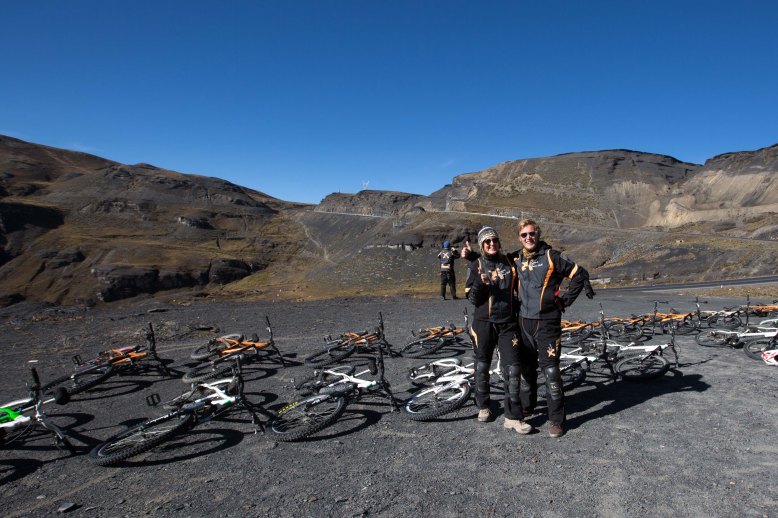 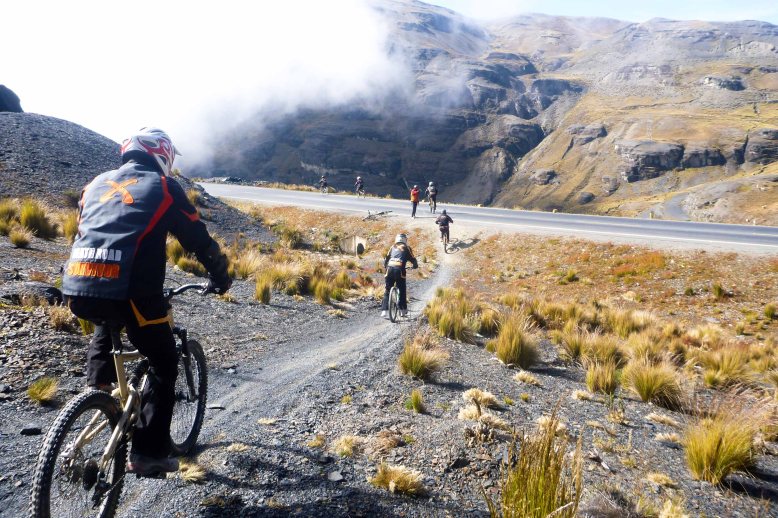 The first part of the Death Road is now bitumen which is perfect to familiarise yourself with the bike (in particular using your brakes, which are the opposite sides to our bikes at home)!  We flew down the hill, trying to pick up as much speed as possible while looking at the dramatic landscape surrounding us.  This section helped to boost confidence in your riding abilities as the road was very smooth and wide (plus it had railings that could potentially stop you going over the edge). 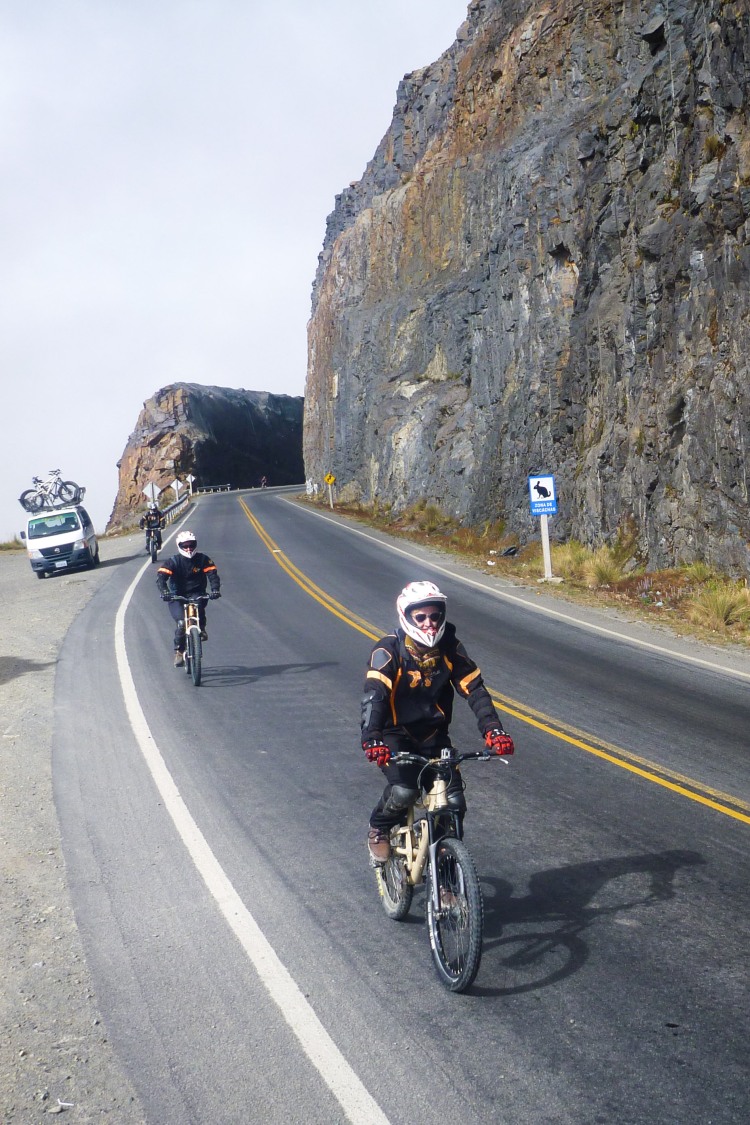 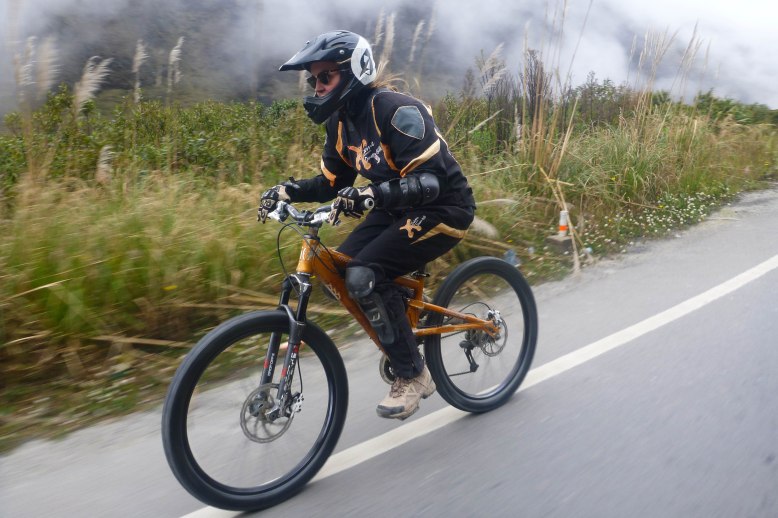 Our first section of rocky road and that confidence was lost as we bumped and slid across the rocks (or in the case of one Brazilian girl, totally ate s#!t)!  We then had a quick ride in the van again to avoid a boring uphill section before arriving at the REAL Death Road.  A quick briefing and we were free to begin descending – from 4700 m above sea level, in a matter of hours we would ride to just 1700 m above sea level.  The cloud was incredibly thick and in some ways perhaps this made it slightly less daunting as we couldn’t see the staggering drops off the cliff.  Not to mention that rather than hugging the mountain side of the road you are advised to stick to the left (closest to the edge) as any vehicles coming up will be on the inside!  We commenced slowly but realised you have to be pretty special to fall off your bike and opted for flying down as fast as we could go!

At it’s thinnest, the road is literally JUST a car width across.  There is now a new road built so the original road is used predominantly for bike riders/tourism but just imagining what it was like when cars, trucks and buses used it is scary enough, let alone the fact that a number of vehicles did actually go over the side!  For the most part, it was completely exhilarating rather than scary and in sections where it opened up wider you could really get your speed up.  Occasionally the cloud would break and we peered over the edge realising that there really wasn’t much between you and a 1000m drop.  We also had to stop ourselves occasionally just to take in the view – so much of the time you are fixated on the uneven road in front of you that you forget just how beautiful your surroundings are.  In contrast to the never ending brick buildings and dry, polluted air of La Paz, the Death Road takes you through green jungle and large valleys, with waterfalls trickling beside you.  After having been quite unwell in La Paz, it really was the perfect antidote. 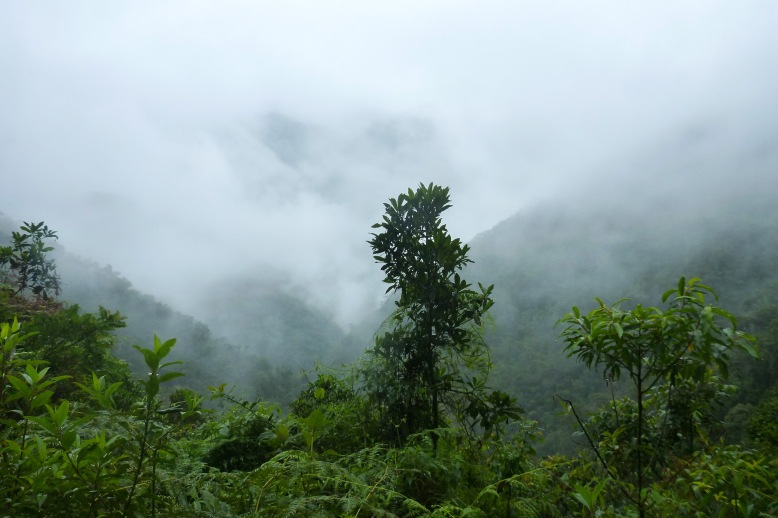 With the final stretch complete we arrived in a small town where we stopped for a well earned beer.  We had officially survived Death Road (and had the t-shirt to prove it) and with lunch and a quick swim it was time to return to La Paz.  We piled back in to our minibus and began our journey back up the new alternative road which was a relief as we had been warned that due to roadworks we may have to go up the original road and were not necessarily thrilled with that idea.  Nevertheless, it didn’t make much of a difference as driving up the new road our whole van of Death Road survivors sat on the edge of our seats as our driver sped through clouds of fog, overtaking trucks at any given opportunity with no visibility of what was in front of him.  We may have survived Death Road but we were seriously lucky to have survived that car ride and it was without a doubt the scariest part of the day! 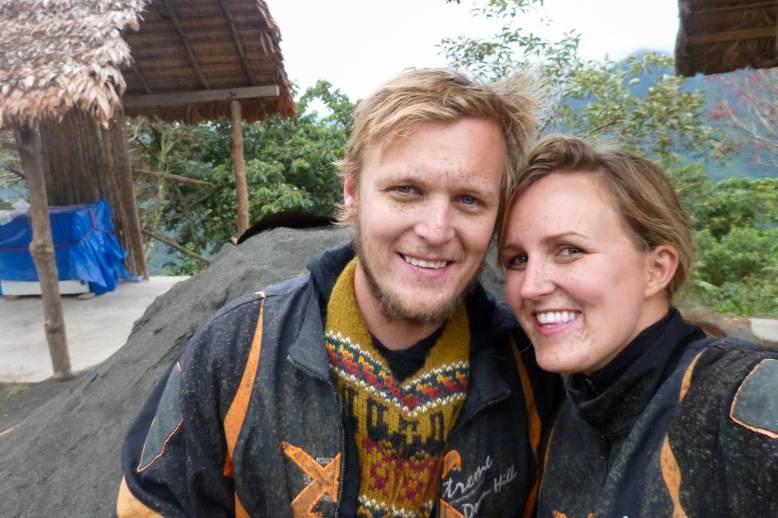 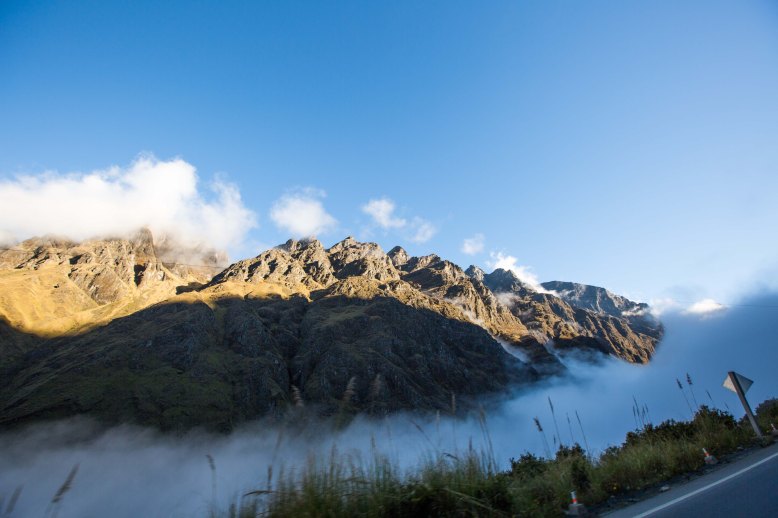 With one day remaining in La Paz we decided to hit the markets.  The streets are absolutely filled with Bolivian women dressed in their traditional outfits, bowler hats and long braids, selling everything from alpaca magnets to gigantic handmade rugs – and so ridiculously cheap!  We couldn’t help ourselves and stocked up on our share of alpaca wool goods (with a 100% baby alpaca jumper costing a small $14) as well as beautiful large rugs, resulting in a whopping 21kg of items being sent home from La Paz.  Love it or hate it, La Paz is quite the experience and in some ways I feel like perhaps we only scratched the surface.  It is a city I find hard to describe as in many cases it seems neither one way or the other but rather a city left open for interpretation and you either get it or you don’t.